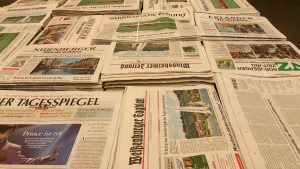 This article is called Competitive Analysis thinking for sensational media headlines and offers our thoughts on finding the truth within newspaper reports and articles.

Have you noticed the language during Covid, Brexit, the US and UK elections? And the headlines shouting at us are getting more extreme? Words dropped into a sentence to over sensationalise a story.

They sensationalise the weather. A sprinkle of snow reported the week before as “Beast from the East set to batter the British Isles”. Or a new strain of the virus is found “Mutant virus is already spreading across UK”.

Headlines designed to cause an emotional response are particularly prevalent in politics. Whichever side you support you are either going to agree or disagree with the sentiment. There are rarely shades of grey, especially with a subject like Brexit. Here are some headline examples:

“Crashing out without a deal” to “Soviet-style control freaks are a threat to our independence“.

“Two thirds of British jobs in manufacturing are dependent on demand from Europe” to “Turkey is going to join the EU and millions of people will flock to the UK”.

“Brexit will lead to Scotland renewing calls for independence” to “Hours from a no-deal“.

These emotional headlines are rarely backed by with source materials. They encourage a strong reaction from the reader. And worse, create a strong divide between people. When you see these sort of headlines dig deeper into the article. Search for quotes and isolate the story’s sources. Find out if the sources are a clear and obvious route to the truth or provide any background to the story. Does the article mention another to this or another story? Is it an original article or just a copy of another?

Now look for the claims the story is presenting. Do any of the text, links and sources provide the data that actually back up any claim? Follow every reference made in the article to find the source data. Ideally, with surveys and claims look for the actual raw data. Take a look at the quotes within the article and the headlines. Did the person quoted actually say what was claimed and, if so, in what context did they say it? Where were they saying it and how were they saying it. What have they since said about the quote and the subject?

Determine if the report is based on a survey. If so, who did the survey and how many took part? When did the survey take place and how and where was the survey distributed and to who? Most importantly, work out who funded the survey? Does this give them influence within the article? What was the poll’s purpose, and what were the questions asked to get to the answer? A poorly worded question will get you an answer you want if you ask enough people.

You see this sort of thing in anti-ageing, makeup and hair treatment TV adverts. The advertisers will say that 85% of people asked loved the product. Then they will tell you 76 people were surveyed. Why 76? Why not 100 or 200? The 76 people got them to a reasonable and fair 85% positivity rating. No one is going to believe success figures of 99/100%. This expansion of the truth also goes on within the mainstream media.

Is there any foundation or support for the conclusions made in the article? If you often read similar articles, are you being targeted? This targeting happens all the time within social media. Ensuring you see interesting things and want you to return. Is the advertising targetting you? Fire up the VPN and see if you can find other sides of the argument.

Who wrote the article? Was it a seasoned journalist, a junior reporter, or is it not mentioned? Can you find any information about them? Do they exist? What else have they written about? How many articles do they write? Too many or just one or two? Can you see any biases?

When evaluating article findings and in fact, any research, look for tangible evidence. The evidence within the opinions, personal experiences, unsupported assertions, and second-hand reports. Ask yourself if you are analysing your findings. Or the results the researcher wants you to believe. How do you decide what to believe? Answer these questions:

Has the researcher offered relevant evidence to the key points mentioned? Are the correct conclusions reached from the evidence you and they have found?

This article was called Competitive Analysis thinking for sensational media headlines and offered our thoughts on finding the truth within newspaper reports and articles.