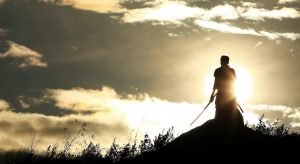 “Spend your time and energy learning about your competition” –

This article is called Competitive Intelligence weapons: Make the wooden sword your weapon and discusses the lessons we can learn from one of the last Samurai, Musashi. The article was written because we often read quotes from business consultants and gurus from Sun Tzu’s “Art of War”. Many quote the book, but fewer have actually read it.

There is another book which, in our opinion, is fantastic for business today. It helps to understand the strategy and your competitive environment. We would strongly recommend reading this book and is required reading in every business school in Japan. The book is by a warrior called Miyamoto Musashi’s – Book of Five Rings.

Written in 1645 and it offers thoughts on how to win battles against your enemy. Musashi was one of the last great Samurai and was undefeated. He had beaten (killed most of them) 60 of his opponents by the time he was 30. It was very much a serious business for him.

Learning everything about your opponent

What his opponents did not realise is that any piece of wood, even a broom handle would have been enough to deliver a fatal blow. He did not spend weeks shaping his sword; Musashi spent his time learning everything he could about his opponent. Asking questions like:

– Who has he beaten?

– What strategies did he follow based in his clan, school, experience and      region?

He answered all the questions to determine his opponent’s weaknesses. He would never go in cold without the full knowledge of his potential killer.

Once he answered these questions, he would practice with his sword to take advantage of his opponent’s weaknesses in their fight style. His muscles memory was primed to deliver the killer strike.

When the fight began, he would know what they were going to do, enabling him to wait patiently and then Bang! He would strike. As his enemy died, he and his team of experts never understood that they had been manipulated.

Thankfully, our business battles are less fatal. However, lessons in his “Book of 5 Rings” are equally important today. Finally, some quick questions. Do you do that? Can you learn to take advantage of your competitors’ weakest points? Do you know their weaknesses?

This article is called Competitive Intelligence weapons: Make the wooden sword your weapon and discussed the lessons we can learn from one of the last Samurai, Musashi.