Are we Thinking? If so, What? 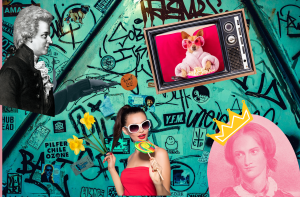 Are we thinking? If so, what?

If Mozart had been born a millennial and been subject to the modern world, would he have produced what he did? For that matter, would a Frank Lloyd Wright, Copernicus, Isaac Newton, or Isaac Asimov?

Or would looking at things about today’s world look different to HG Wells? Would George Eliot be astounded at the fleeting momentary celebrity of ‘Middlemarch’… as a dramatised TV production? Yet, amongst all the other shocks such a visitor would doubtless feel. Jarred, by the lack of recognition and awareness that her wonderful work became a vehicle of a different kind in this age. And unfortunately that almost nobody knew that she was the author.

Moreover, even though what would undoubtedly be a shocking experience to be teleported. Or whatever technological marvel travelled her would be, might she allow herself to reflect that the realism in her writing, her reality, her experiences, and her endeavours were somehow missing? Despite the culture of her day requiring her to present her identity as a man? The intimacy of the author-reader connection is seldom there when the medium is transmogrified. To a time travelling George, it would be as alien as everything else that would no doubt shock her.

If such a wonderous technology as the time machine was invented today, what would be done with it? I doubt if the list of most important and immediate tasks would be to “go get George Eliot” as other more important imperatives would surely be considered. About now, if this was a YouTube video, I would probably be asking for you to “Put your ideas on how to best use a time machine in the comments below.”

“I will show you fear in a handful of dust,” wrote another Eliot, T.S Eliot this time. Like the great literary and artistic figures through history, Eliot wove his experience, reality and creativity, and the magnificence in ‘Wasteland’ is a superb amalgam of influences from The Fisher King and the Holy Grail, in reflection of the contemporary society of the early 20th century. This enchanting and masterful poem was a work that took him some years to create. Would today’s world see Mr Eliot working in the media of today? As you read this, whatever he created would be digitally transmitted, as would the writings of Rosseau, Shakespeare, Hemingway and Spinoza.

What would the greats of history make of the amenities that technology offers?

“What is really amazing, and frustrating, is mankind’s habit of refusing to see the obvious and inevitable until it is there, and then muttering about unforeseen catastrophes”

Let’s not stop there. Would Oppenheimer have fared better with producing a bigger, faster, better ‘Fat Man?’ Would Marie Curie have been able to make the ground-breaking work in the sphere of radioactivity with the aid of today’s technologies? Certainly, yes, I imagine you think. I would agree, but with a question that would need to be attached to any number of other imaginary scenarios – would the technology itself have negated much of the inspiration and imagination that created the very stuff that was created without it?

Are we Are we thinking and challenging ourselves?

Are we losing out by deferring to the genius of wonderous machinery? Could we be deferring to the gods of convenience at a higher cost than we realise? This question isn’t an inference that technology is bad per se, more that it is becoming too pervasive both physically and psychologically. As a result, it just might be that we are missing our ‘apple falling from a tree’ moment when it comes to the intuitive and creative flashes of inspiration. Could it be that as we have become increasingly reliant on the technological wonders of the modern world, we are no longer thinking in the same creative way? Are we still thinking at all and using our brains in challenging and stimulating ways? Are we defaulting to technology and paying a greater price than we realise?

Up! up! my Friend, and quit your books, Or surely, you’ll grow double:

Up! up! my Friend, and clear your looks; Why all this toil and trouble?

There is room to consolidate the ‘good stuff’ from technology without forsaking the alchemy of intuition, memory, suspicion and feeling. There is much to be said for an experience beyond the occasional upgrading of the CV. Experience is an asset bank to guide the resourcefulness of judgement and decision-making; it feeds intuition, the hunch that led to the critical realisation, the pivotal spark that suddenly makes it all ‘fit.’

These very human aspects are employed to significant effect in the work of intelligence gathering. Of course, augmented by analytical algorithms and other wonderous aspects that make collation and process much more expansive. But without practised intuition, experience, and craft, big data and machine learning are just digital ‘things’. Like a drum kit without sticks or a one-wheeled mountain bike – they don’t deliver without human interpretation. So before we all rush off once more and let AI do it all, why don’t we focus on how we should use technology as support? Without giving our own intuitive reasoning away too readily? Failing to trust and engage your own critical and creativity at the expense of reflecting later on a wasteland of regret by our own thoughtlessness. You decide, am I ‘write’ or wrong?

“In the land of the blind, the one eyed man is king.”

And as if to make a point. While writing this article, Grammarly attempted to correct the words of Wordsworth, Erasmus and Asimov.

Are we thinking? If so, What?

Octopus Intelligence is a skillfully crafted and much-imitated competitive intelligence agency that operates around the world. Still, it retains a boutique architecture and a passion-driven culture to deliver the facts and the truth with intuitive strategic advice and proven evidence to clients who need to know what threatens them and want to know what opportunity is available to them.

Feel free to get in touch with us today to discuss your situation.

Home » Blog » Understanding Competitive Intelligence » Are we Thinking? If so, What?